Walking into the O.Henry Hotel in Greensboro, North Carolina, feels like walking into a different time — where one partakes in the ritual of afternoon tea before settling down for an evening of jazz, dinner and dancing. The richly designed lobby features elegantly carved wood paneling, sumptuous window treatments, and overstuffed sofas and chairs that invite visitors to sit down, sink in and stay awhile. Look up and you can read the full text in gold relief of The Gift of the Magi, the most famous work by the short story writer and Greensboro native for whom the hotel is named.

From the vintage Checker cab waiting to whisk you off into the city to the tastefully appointed guest rooms, the entire hotel exudes a magical sense of time and place that founder Dennis Quaintance set out to achieve with his wife, Nancy, when they first hatched the idea for the O.Henry Hotel more than 30 years ago. Taking its design cues from the original hotel of the same name — located in downtown Greensboro from 1919 to 1979 — the current facility, built in 1998, looks to the past while embracing the future. A combination of modern hotel amenities and striking exterior design features make it one of the most recognizable buildings in Greensboro. “The O.Henry is an iconic building,” said Fred Burke, president and CEO of The Dize Company, a large fabricator and distributor of commercial and residential awnings, tarpaulins and window coverings on the East Coast. Dize recently replaced the 131 awnings that provide the O.Henry Hotel with its handsomely designed façade. “The hotel is one of the tallest structures in this part of town and receives a lot of direct sunlight and exposure to the elements,” Burke explained. “The awnings are replaced every seven years in order to keep the façade looking as sharp as the day the hotel opened 18 years ago.” 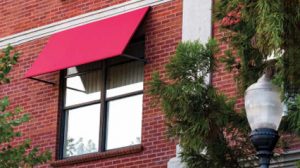 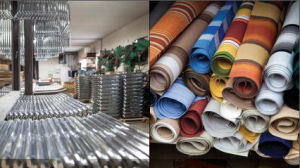 The Dize Company has been doing business with Quaintance-Weaver Restaurants and Hotels — one of the only employee-owned hotel companies in the country — for more than 20 years. The awning replacement project came on the heels of another project for Dize at the O.Henry — a shade and rain barrier for the courtyard of the Green Valley Grill, a European-style restaurant connected to the hotel. Though Dize is no stranger to large-scale commercial projects — the company has been in business since 1913 — this particular awning replacement project came with its fair share of challenges. If not for close collaboration between the hotel and the company, the project could have been a logistical and engineering nightmare. “Initially, we thought we’d be able to close an entire floor at one time in order to take off the existing awnings and replace them with new ones,” Burke said. “But we had to be sensitive to the guests and work around scheduled bookings.”

Usually in a project of this scale, Dize would replace the awnings from the outside, but this can be difficult to do while there are guests staying in the hotel. Delivering the highest quality end product with minimal disturbances to guests required Dize and the O.Henry team to think outside the box. “This was a unique project for us because we ended up replacing the awnings from inside each hotel room rather than from the outside,” Burke explained. “We worked closely with the O.Henry team during the project and also did a dry run two weeks before the project was scheduled to commence in order to work out any kinks in our plan. That’s why, once we got started, we were able to replace all of the awnings in just three and a half weeks — well ahead of our proposed five-week timeline.” For each room, Dize supplied a crew of four fabricators/installers who worked in close collaboration with four O.Henry team members.

First, the O.Henry crew removed the windows in each room so the Dize crew could extend a boom outside the window. The awning was then disassembled and reassembled on site using Crimson Red Firesist® awning fabric, a standard in the industry. The O.Henry team then replaced the windows while the Dize crew moved onto the next room. “The Dize Company has been working with Glen Raven for a long time — since before Sunbrella was introduced,” Burke said. “This project was really great because we’re a local company that got to use materials from a local North Carolina company on a local hotel whose mission is to be ‘in and of’ the Greensboro community. The O.Henry is a focal point in the Greensboro landscape and we’re proud to be a part of its story.”

Henry Duda and his wife, Lorraine, were camping in their Airstream trailer in the mid-1960s when Lorraine, decided she’d had enough. The camper was adorned with a simple awning, one that required a great deal of manual installation. A two-person job, the first step was to slide the fabric into the awning rail channel, a process that required precision. Once the fabric was in place, Henry would hold the channel above his head while Lorraine set the stakes. The duo would then work in tandem to bring their pieces together to assemble their awning. “Simple, right?” asked Jim Webb, president of Awnings by Zip Dee Inc., as he recounted one of the many times the Dudas would manually erect their awning on a camping outing. “It was such a frustrating, time-intensive ordeal that Lorraine finally told him, ‘If we have to put that awning up one more time, I’m not going camping anymore.’ ” As often happens, many businesses are founded when someone identifies a problem and works to find a solution. Such was the case of Awnings by Zip Dee, a global provider of products for recreational vehicles. Following his wife’s pronouncement, Duda, who at the time was a successful dairy businessman, went to work on building a better awning.

“Being in the dairy business, Henry knew that stainless steel was the key to improving an awning structure,” Webb said. “He designed an awning for his Airstream using stainless steel for nearly everything — channels, nuts and bolts, washers, screws and other hardware.” The end result was an awning that was easier to install and one that would have a longer, rust-free life. As soon as it was installed on his trailer, a neighbor spotted it and asked Duda to build one for him. Duda promptly left the dairy business and, in 1967, founded his new awning company, which would need a name. With a nod to his last name and the power of a catchy song, Duda (pronounced doo-dah) had the tune “Zip-a-Dee-Doo-Dah” stuck in his head one day and the rest is history. Today, Zip Dee manufactures awnings, folding chairs, tire shades and screen enclosures for both the aftermarket and OEMs. Each Zip Dee awning is individually handcrafted in the United States and shipped globally from its headquarters in the western Chicago suburb of Elk Grove Village, where Zip Dee works with customers to identify the right RV accessories for their travels. “Our company is driven by a single goal — make the best RV products in the industry,” Webb said. “We don’t follow the industry, we lead it. No one else takes the time to make each awning to order or uses as much stainless steel or hand finishing as we do. And no one comes remotely close to offering as many options and customized extras.” Take awning colors, for example. Zip Dee offers more than 150 fabric colors and patterns, including vertical patterns and classic solids, in every shade and hue imaginable. And color is not the only advantage Zip Dee offers. Contrary to industry norms, the company custom makes awnings to virtually any dimension, in lengths from nine to 23 feet, and any odd size in between, inch by inch. “I learned from Henry that quality is job one and that’s what we stress,” Webb said. “If someone wants a job done cheaply, then I have no problem passing on the opportunity.” Webb, a sailmaker by training, became president of the company in 2005, when he and two long-time colleagues, Ron Mullins and Ursula Kaceynski, bought the company from Duda’s son-in-law, Bob Miller, who became president following Duda’s death in 1985. Webb and vice presidents Mullins, who heads manufacturing, and Kaceynski, who manages fabric selection, lead a team of 30 employees who have built Zip Dee’s RV awning product lines to be among the most comprehensive in the industry:

• The Evolution Series – No more roughing it, a touch of a button extends the AutoAwn and Evolution Automatic Window Awning.

• Patio Awning – Whether a coach has straight or contoured sides, Zip Dee has a tailored awning and companion hardware to create the perfect streamlined look.

• Window, Door and Slideout Awnings – Zip Dee awnings will keep out the sun and rain, while also providing extra privacy.

To complement the company’s focus on sourcing only the highest quality materials, each Zip Dee awning is made with Sunbrella® fabrics — a major selling point for customers familiar with the iconic brand. Zip Dee has specified Sunbrella since 1967, a relationship that includes advice on the latest color and design trends for its product lines. “Sunbrella is a constant source of design inspiration,” Webb said, adding that Glen Raven’s distribution subsidiary, Trivantage®, is an important partner in helping the company stay abreast of evolving customer tastes. “We are a leader in our industry in no small part due to our partnership with Trivantage,” he added. “They are a leader in where our customers are headed and instrumental in helping Zip Dee build a global brand.”

On the web at awningsbyzipdee.com

This Sliding Bar can be switched on or off in theme options, and can take any widget you throw at it or even fill it with your custom HTML Code. Its perfect for grabbing the attention of your viewers. Choose between 1, 2, 3 or 4 columns, set the background color, widget divider color, activate transparency, a top border or fully disable it on desktop and mobile.
Go to Top